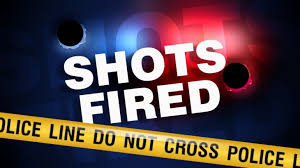 On 05.24.21 at 8:45 PM the Northern York County Regional Police Department responded to a shots fired call in North York Borough.  The shots were fired on N. Duke St. between E. 4th Ave. and E. 5th Ave.

It is unknown who or what was the intended target.  No person or property was found on scene that was struck from the gunfire.  Seven 9mm spent shell casings were found at the scene.

Witnesses described the shooter as a younger thin black male.  He was to be in the front passenger seat of a silver Honda Civic.  The driver and backseat passenger of the Honda were also described to the police as young black males.  The silver Honda was reported to be displaying a Pennsylvania registration plate with the first three letters LMB.

If you have any information regarding this incident you are asked to contact the Northern York County Regional Police Department at 717.467.TELL (8355) or at tips@nycrpd.org